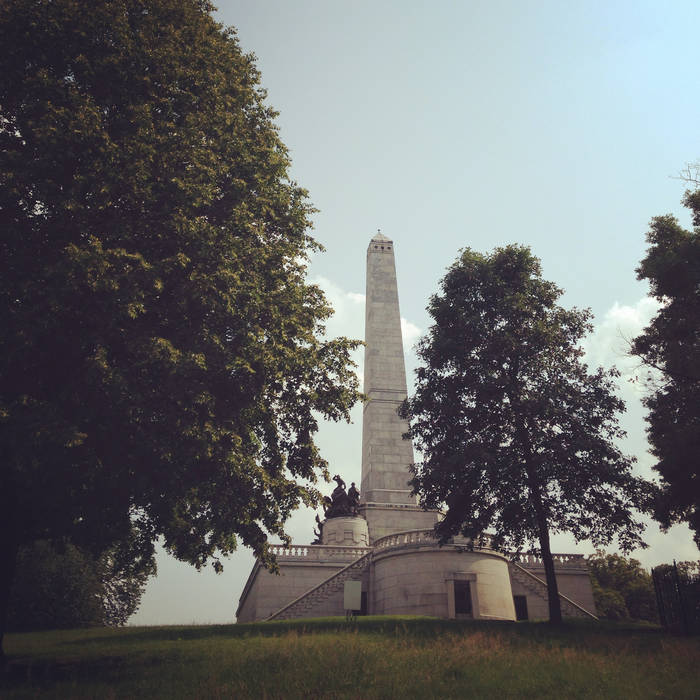 "A great piece--subtly eerie, moving and beautifully restrained throughout." --Brian Olewnick, Just Outside

Structured around revisitation and remembrance, <<The Widow>> is distilled from multiple recordings made in and around the Lincoln Tomb, located in Oak Ridge Cemetery in Springfield, Illinois. The tomb serves as the final resting place of Abraham Lincoln, Mary Todd Lincoln, and three of their four sons.

Crowned with an enormous obelisk and elaborate statuary groups honoring the four branches of the Union military, the tomb can be entered through a heavy steel door to the south. Visitors enter into a rotunda, from which hallways—finished in highly polished and resonant marble, trimmed with bronze—lead off to the burial chamber. President Lincoln's remains are interred in a concrete vault ten feet below the marble floor of the burial chamber and marked with a massive granite cenotaph. Crypts in the south wall of the burial chamber hold the remains of Mary, Edward, Willie, and Tad Lincoln.

Recordings were made during multiple visits to the tomb and the surrounding cemetery over the course of several years. These recordings were played back and rerecorded in situ during later visits and subsequently woven together with additional recordings made elsewhere, including in Batavia, Illinois, where Mary Todd Lincoln was briefly confined to an asylum in the years following her husband's assassination. In accordance with the score, each of the four tracks explores a different season of the year, documenting the passage of time and the changing environment both within the tomb and in the encompassing landscape—visited by families of tourists in the summer, empty and near silent in the winter. As a whole, the work attempts to evoke the overlapping resonances—private, public, and political—that gather around the site.

Performed and recorded in and around the Lincoln Tomb, Oak Ridge Cemetery, Springfield, Illinois 2015-2017; Batavia, Illinois, 2015; and Shiloh, Tennessee, 2016.

Joseph Clayton Mills Is an artist, composer, and performer working at the intersection of language, composition, and archival practice. He is an active participant in Chicago's improvised and experimental music community, where his collaborators have included Adam Sonderberg and Steven Hess (as Haptic), Michael Vallera (as Maar), Noé Cuéllar, Jason Stein, Michael Pisaro, and Olivia Block. ... more

Bandcamp Daily  your guide to the world of Bandcamp

Khruangbin and Greg Foat stop by with their amazing new LPs.